Measuring the Flow Rate in Music

In my last article, The Subtle Flow in Music Revealed, we discussed the origins of The Adagio, its intended use in measuring the subtle flow in music, and several video examples of The Adagio in action with several different styles of music.  In that article, I mentioned that the original Adagio used an attenuator so that the rotation of the cylinder, and thus the speed of the moving line, could be adjusted from 0 rotations per minute (i.e., it isn’t moving at all), up to 12 rotations per minute.

The “flow rate” can vary from piece to piece, and in fact can even vary by the particular interpretation (i.e., a particular conductor’s or performer’s rendition) of the same piece.  I therefore felt it was necessary to make The Adagio speed adjustable, so that I and other musicians could adjust the speed to fit the flow of the music appropriately.

You might ask “how” one can determine the correct speed of The Adagio?  This is an important question. The best way to answer is to provide a an explanation of how I go about setting a flow-rate of The Adagio to a particular piece of music.

First, it is important to set some parameters.  In my research, I have found that of course, all music has positive flow (i.e., not zero), and I have found that most music flows at the rate of at least 3 revolutions per minute (RPM).  This is extremely slow movement, and can be difficult to follow for initiates.  Some of the slowest I’ve come across are Gregorian Chants, which I’ll discuss further on.

This step is probably the most difficult, because it is totally intuitive.  The best way I can describe it is to just listen to the music and adjust the attenuator (speed regulator) faster and slower until it just “feels” right.  I.e., the flow of the moving line matches what you are sensing to be the flow of the music.

Note that most users will tend to set the flow pace of the Adagio too fast at first, this is a common tendency. I would recommend viewing some of my training videos (on YouTube) over several weeks to get a sense of the Adagio flow vs. the music presented in these training videos, then revisit the piece you are analyzing to see if it should be set at a lower speed. This may take several tries over several weeks at first, then should become more intuitive and expedient with some practice. This training video is a good place to start.

I have noted some correlation between tempo and RPM.  Usually, the faster the BPM (Beats per Minute), the faster the RPM.  Most classical music prior to the year 1810 (early Beethoven), used a fairly regular compositional cadence, typically 4 or 8 bars.

It is often possible to either make minor adjustments to the speed you have landed on in step 2, or possibly back into the flow rate using analysis. For example, in the Mozart video below, Piano Concerto #21 – the andante movement, The Adagio rotates 1/4 turn (90°) every 4 bars. Other statistics are as follows: 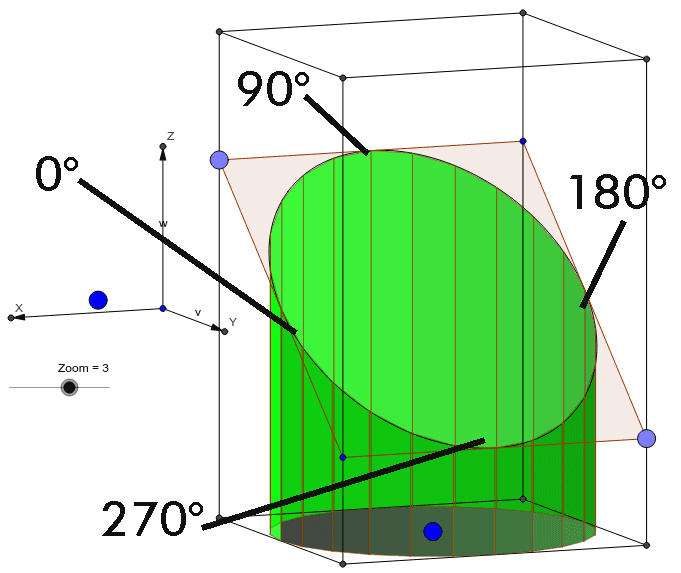 The chart below identifies some main compositional events as it relates to the Adagio. In the video, the Adagio will fade out at these points allowing you to see where you are in the score (mostly – sometimes the score in the video doesn’t always “turn the page” quickly enough). You can pause the video if you’d like to study the score in more detail.

It is interesting to note that in this piece, 180° seems to be a dominant “hit point”.

Once the Adagio’s rotation speed is identified and set correctly, the conductor and/or musician can relax and integrate the visual flow with his/her performance of the piece at hand. Music Flow training can begin.

The reader will also note that some correlation does exist between the Adagio flow rate and the BPM (Beats Per Minute). In this case, 1/4 rotation takes place over 16 beats. In general, the slower the BPM of the piece, the slower the rotation speed, and conversely, the faster the BPM the faster the rotation rate. More exact flow rates will need to be adjusted using the steps outlined above.

As mentioned earlier, most quality music varies between .8 RPMs, to around 3 RPMs. In my previous article we discussed the possible psychological effects after watching the Adagio, and in my article entitled Stress Reduction and Right Brain Hemisphere Activation -a Research Study, I elaborate more on this, along with the possibility of healing effects, especially with stress related diseases.

While working with The Adagio, I noticed a correlation between the speed of the rotation, and the degree of the altered state of mind, i.e., relaxation and an altered perception of time (ones perceptual field seems to change, and things perhaps gone unnoticed before, become noticed). The slower the rotation speed, the greater the intensity of this altered state (the viewer however, must maintain concentration on the moving line to the extent possible to achieve maximum effect).

Maintaining focus and concentration becomes more and more difficult, especially for the novice, as the rotation speed approaches 3 RPM. This brings me to the discussion of early church music, such as Gregorian Chant, which has a barely perceptible flow movement at all! It requires extreme focus and concentration to maintain your connection with this extremely slow flowing line.

Here is an example of a Gregorian Chant (with a contemporary arrangement) . The movement is barely perceptible, with a rotation speed of only 1 rotation every 2′ and 14″, or .3 RPM. This slow movement would be a challenge to the beginning student, and even more advanced students. Also note that this piece also has its compositional cadence, “end point”, at 180°. Also note that the piano comes in at 36″ from the beginning, at the 90° “hit point”.

Here is a good example of a piece with a rapid rotation rate, written by Gil Evans and performed by Miles Davis. It has a rotation speed of a revolution every 40″, or a sprightly 1.5 RPM!