This article is an overview of a study conducted at the Nova University Biofeedback Lab, resulting not only in a new approach to stress reduction, but also an innovative method to “exercise” our right brain hemispheres promoting its rightful and equal dominance with the left. Doing so results in an increase in creativity, mindfulness, and a higher degree of empathy towards others and the earth. In short, increased right-brain holistic thinking would improve our world-view to be more inclusive of both our bio-sphere and our human-sphere, and reconnect us with our essential creative and loving spiritual selves. 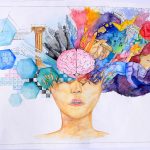 Creativity as measured by the Torrance Tests of Creative Thinking increased until 1990 in the United States. Thereafter scores have been declining. Kyung Hee Kim at the College of William & Mary discovered this in May, after analyzing almost 300,000 Torrance scores of children and adults. Kim found creativity scores had been steadily rising, just like IQ scores, until 1990. Since then, creativity scores have consistently inched downward. “It’s very clear, and the decrease is very significant,” Kim says. It is the scores of younger children in America—from kindergarten through sixth grade—for whom the decline is “most serious.”

James (JR) Wilson is an author, composer, recording artist, and inventor of The Adagio. He can be reached at jimdubyah@gmail.com

I was involved with the experiment at Nova U. in several ways. I am the inventor of the visual device used for the RHA group, then called a ‘Kinescope’.  As the inventor, I was heavily involved in the Kinescope’s setup and use.  I am have computer and statistical expertise,  so helped Dr. Keen process the mountain of data collected during the study.”