It was 1967 when I first became aware of the subtle “flow” in music.  I was a music student then, studying music and music composition with noted author, theoretician, and composer Hugo Norden[1] at Boston University’s School of Fine and Applied Arts.

Most of us music aficionados are drawn to quality music (most often classical music from various cultures, jazz, and occasionally popular music – usually ballads) for a number a reasons, but a least one of those reasons is the sense of peace and transcendence it can provide.   One night, while doing nothing in particular (“zero tasking” as I call it now), just relaxing while listening to Miles Davis’ Sketches of Spain album (more specifically the Solea track – video example provided below),  I had one of those rare transcendental moments where you are elevated beyond your physical self to be an “observer”, not the usual “participant”.  I “watched” remotely as my hand moved slowly up and down to the music.   “What is this?”, I wondered.  It is NOT tied to rhythm.  In fact, it is almost the antithesis of rhythm, flowing and pushing back against the discreet rhythmic events. It is NOT tied to melody or harmonic content, as “the flow” had no reference to pitch or duration of notes (that being said, melody and harmony can indirectly affect flow, as the melody can define the up and down movement of the flow – see the Miles Davis example provided below).

This moment stuck with me, and would occupy my thoughts off and on over the next few months.  I was also curious about the “up and down” movement I was sensing and moving my hand accordingly.  I felt compelled to figure out a way to replicate and quantify this, but how? 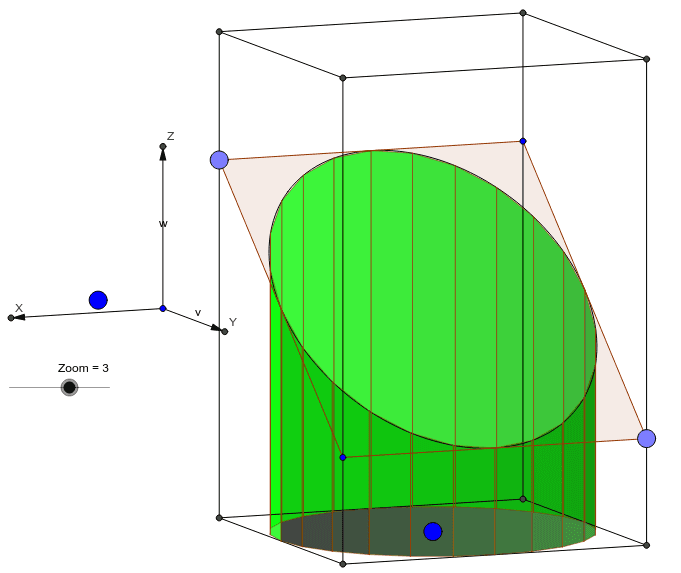 The next challenge; how do I make the “flow” continuous and repetitive?  Somehow, I had to join the tail end of the curve (360°) with the beginning of the curve (0°).   I imagined wrapping the lines three dimensionally, so the beginning would meet the ending.  I sketched out the sine curve on paper, cut the paper, and then wrapped it around so that both ends met.  I was surprised (along with my calculus professor at the time) to see that my new 3-D representation formed a perfect ellipse!  There is was, I had my model!

Several more design details remained.  I had to have a visual line that moved and was controllable.  During my summer break from music school, I went to work building my first Adagio (a.k.a. Kinescope/Kintron).  I built a hollow cylinder out of flexible Plexiglas, and inserted a light in the center.  To achieve rotation, I mounted the cylinder on ball bearings so that it could freely rotate.  I then installed a slow rotating electric DC motor, capable of being speed regulated by an attenuator, and attached it to a pulley mounted on the cylinder.  The cylinder was able to rotate from 0 rotations per minute up to a maximum of 12 rotations per minute. I then attached my 3 dimensional paper ellipse cut out to the inside of the cylinder, with only a small slit visible to the viewer from the outside, giving the illusory effect of a thin floating line of light, tracing the perimeter of the ellipse.

Another month of tweaks and adjustments, and there I had it, a finished functioning Adagio that could be used for music analysis and/or psychological research (see a picture of the original Adagio on the left).

After a year or so of using the Adagio for my own music research, I began to notice that watching The Adagio was having a psychological effect on me; after watching it for a short while, my sense of time slowed down, inducing a pleasant state of relaxation, almost meditative and transcendental in nature.

(This state-of-mind achieved by watching The Adagio provides the necessary platform for launching into what Mihaly Csikszentmihalyi2 calls “the flow state”. I will elaborate more on this important association in a subsequent article).

The altered state I was experiencing ultimately led to a full-fledged research project (long story) conducted at Nova University’s bio-feedback laboratory, under the auspices of noted researcher Dr. Joe Kamiya, often referred to as the “father of Neurofeedback”.  A summary of the research can be reviewed HERE ( and HERE for the complete, original research document). The scientifically conducted study demonstrates that the Adagio does in fact induce a state of relaxation to the viewer after only 20 minutes of exposure, paired with quality music playing simultaneously in the background.

Here is the Adagio hard at work, paired with Mozart’s Piano Concerto Number 21.  This video can be and is used by music students and professionals alike to help understand and experience the underlying flow in music.  It can also be used for flow state training in other fields, such as dance, sports, and even occupational therapy.

As I mentioned earlier, melodic and harmonic content can help accentuate the upward and downward movement of the Adagio’s flowing line.  Watch/listen to Miles Davis as his trumpet line reaches peak upward tension, then releases the tension while playing lower and lower notes as the visual line Adagio also flows downward.    Also note the buildup and release of compositional/harmonic tension (in general) as the composition drives forward.   It’s not a perfect match but close!

[2] Books and Articles by Mihaly Csikszentmihalyi: