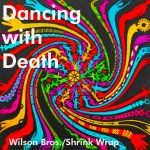 After reading Stephen Levine’s’ A Year to Live: How to Live This Year as If It Were Your Last, it occurred to me that maybe one way for me to begin fully facing my own mortality would be to embed messages (i.e. recorded voices) talking about death into music that I liked and would listen to consistently.  Thus, I began creating this music using a digital music program called Ableton 9 Live and recordings of me playing drums and trumpet.  The voices, gathered from a variety of sources, were chosen because I either found them inspiring or judged them as having a message that I “needed” to hear to help me overcome my fear of death.

After creating enough music to determine that this idea might be feasible, I asked my brother James, a fine composer and saxophonist to join me (collectively we are Wilson Bros/Shrink Wrap).  Since we now live in different states, our collaboration on this project was totally done digitally over the internet.  In most cases, I would send him files of what I was working on and he would improvise over sections where it seemed appropriate, record his solos, and send the resulting track back to me via the internet.

The end result is music which I am hard pressed to categorize.  “Down Tempo Ambient”, “Psybient”. Psychedelic Trance, World,Tribal, and Fourth World (coined by trumpeter Jon Hassell).  For lack of a better description, these are terms which could be used to capture the genre what we ended up with. 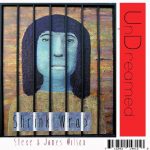 Their compositions can be relegated to the background of the mind, or, if the listener so wishes,  brought into “mindful” space where he or she can “engage the different areas of [the] brain.”  – B.K.

One Mind Media is dedicated to exploring and enhancing our personal and societal balance. It is our belief that our species, especially in western cultures, has become too left brain dominant, i.e., \”The World Is Too Much With Us\”, and we have lost touch with our essential/spiritual/cosmic selves.